Sensei Dominic Morin, 4th dan, is passionate about practicing and teaching martial arts. He opened his first karate school in Joliette in 1997 and has since then built a community of adepts  of all ages.

His karate and martial arts school is florishing. A seasoned businessman and charismatic teacher, Sensei Dominic has surrounded himself with a solid team of instructors who assist him in realizing his numerous projects. Along with his family, he continues to share his passion for martial arts with as many people as possible.

A native of Chicoutimi, Sensei Dominic Morin begins practicing martial arts in 1985 and then starts teaching karate in 1992.

In 1993, he appears before Soshu Shigeru Oyama, 10th dan, and obtains his 1st dan black belt to become a certified instructor mandated by the World Oyama Karate organization. On May 23, 1999, he adds a 2nd dan to his belt during a test at the Organization’s Headquarters in New York City. He continues to rise through the ranks with a 3rd dan awarded by Soshu Shigeru Oyama in 2002.

In 2002, he is chosen to represent Canada at the Oyama Karate World Championship in New York City where he wins 3rd position.

When Soshu Oyama retires in 2004, Sensei Dominic leaves the Organization to open his independent school (Me Sen Karate-Do), based on the teaching he himself had received and with the aim of perpetuating the philosophy of full contact traditional Japanese karate.

Sensei Dominic remains active in full contact knockdown competition for several years while coaching a team of junior and senior competitors participating in tournaments and championships across North America. He even makes it to the Open European Cup in Poland with his team in 2015.

Sensei Dominic trains in grappling with ISWA. He earns his blue belt (instructor) in grappling (jiu jitsu and wrestling submission) in the Bujin Organization (Progressive grappling art) under the tutelage of Sensei Jean-François Paradis.

He joins the XMMA, Ringside, Instinct, LAMMQ, UCG galas with several professional MMA athletes. Since 2010 he is the promoter of the amateur MMA gala K.E.F. He is an active member of the Amateur Muay Thai Federation of Quebec, the Amateur Mixed Martial Arts Federation and the Quebec Amateur Kickboxing Federation. He sets up a competition team for amateur galas across Quebec. Sensei Dominic and one of his fighters (Miky Houle) are part of a mixed martial arts docu-reality film called Hors Combat.

Being a specialist in breakage (tamashiwara), Sensei Dominic stands out with several spectacular breakages of baseball bats and cement blocks.

He also works as a respiratory therapist from 1994 to 2012. Since 2006, his dojo and all his instructors have been certified R.C.R. and immediate care by the heart disease foundation.

He travels to Japan to train with Shihan Nishida in 2018, always in search of new knowledge in martial arts.

Sensei Dominic Morin pursues his mission and his passion. His priority is to promote the practice of martial arts within his community and to instill the values ​​of respect, patience, effort and commitment to young and old alike who join the big family of Joliette Kanreikai Karate. 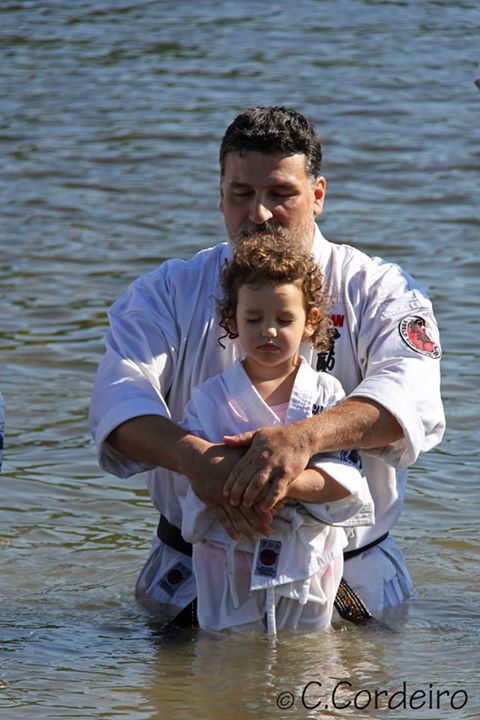